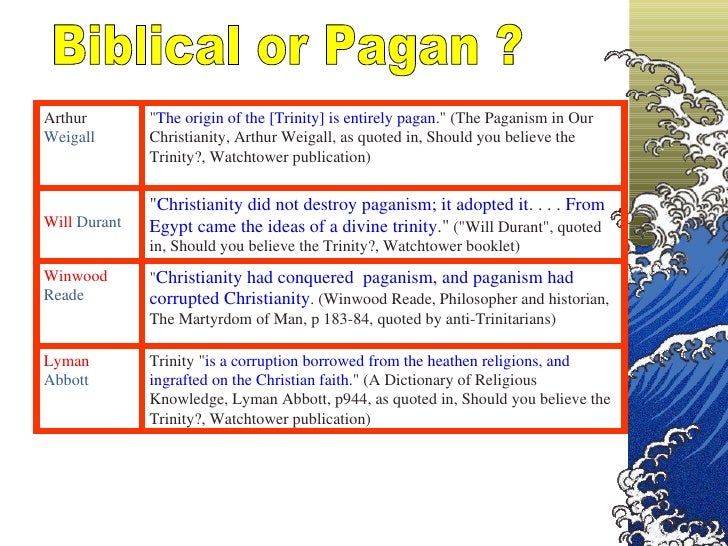 British historian Winwood Reade in his Martyrdom of Man, 1892, reports the shocking facts: “The Church diverged in discipline and dogma more and more widely from its ancient form, till in the second century the Christians of Judea, who had faithfully followed the customs and tenets of the twelve Apostles, were informed that they were heretics. During that interval a new religion had arisen. Christianity had conquered paganism and paganism had corrupted Christianity. The legends which belonged to Osiris and Apollo had been applied to the life of Jesus. The single Deity of the Jews [Mark 12:29] had been exchanged for the Trinity…The man who had said ‘Why do you call me good? There is none good but one, that is God,’ had now himself been made a god, or the third part of one” (p. 230).

They had never actually been his true followers, and they had not paid enough attention to his teachings — which tradition had swamped. “In vain they worship,” Jesus complained, “teaching for doctrines the commandments of men” (Matt. 15:9).

Biblical Concept of God:
They have submitted themselves, often unknowingly, to a set of creeds and beliefs which date not from the Bible (which is then very inconsistently said to be the “sole authority”). The  post Bible creeds of Protestants commit them to believing that God is three in one. Jesus did not believe this. Jesus agreed with a Jew in Mark 12:29 that God is a single Divine Person, the Lord God of Israel, the God of Abraham, Isaac and Jacob, the God of David and the God of Jesus. There is only one Person who is YHVH, the Father (John 17:3), and this is the central truth by which the universe is, or ought to be, controlled. Jesus called this belief in the One God of Israel the “greatest command” (Mark 12:28ff). Are you hearing clear sermons on this “Greatest Command” of Jesus?

Influence of Greek philosophy:
From the second century AD onwards, believers became confused under the influence of Greek philosophy introduced by “converts” who came into the church without fully abandoning their former pagan understandings. Gradually the definition of the biblical faith was transformed into a belief system which was strangely alien to the teaching of Jesus and the Apostles. God was turned into a mysterious three-in-one God, whom Jesus did not acknowledge (John 17:3; Mark 12:29; Deut. 6:4). The human Jesus, supernaturally brought into existence by miracle in Mary (Matt. 1:20: “begotten, fathered in her”; Luke 1:35: “the child begotten”), was replaced by a second, non-fully human, i.e. preexisting Person, either an angel, Michael as Jehovah’s Witnesses now claim (their founder Russell did not!), or a second “Person” of the Godhead, a second Deity.
[Introduction to my translation of the NT (The One God, the Father, One Man Messiah Translation with commentary, from Amazon.com or Atlanta Bible College, 800-347-4261)]

Born Again Christian:
The foundation in Jesus’ teaching must never be neglected. Jesus spoke of the need to be born again to gain salvation (John 3:3-8). Peter explained the very same process of rebirth when in 1 Peter 1:22-23 he wrote, “In obedience to the truth [the saving Gospel]…you have been born again.” It was the seed of the parable of the
sower which caused that rebirth (1 Pet. 1:23 = Luke 8:11). That seed was contained in the word which was preached to you as Gospel (v. 25). What perfect simplicity and harmony between Jesus and his apostolic students and teachers. Then never forget that “some believe for a while” (Luke 8:13). Salvation requires persistence through trial and tribulation until the end.
Source: http://www.focusonthekingdom.org/197.pdf